With the unofficial start of summer, now is a good time to start planning to reduce the number of mosquitoes around your home. Worldwide there are approximately 3500 species of mosquitoes.  They live in almost every region of the earth from subarctic to the tropics. As of 2015,  63 species of mosquitoes were found in New Jersey.  Mosquitoes are members of the order Diptera.  The word Diptera comes from the Greek di which means two and ptera which means wing.  The order Diptera also includes the common housefly.

Like other true flies, mosquitoes undergo a complete metamorphosis: egg, larva, pupa and adult.  The larvae are anatomically different than the adult mosquito, it lives in a different habit and feeds on different nutrients.  The pupa is a non-feeding stage.
Mosquito larvae are uniquely adapted for aquatic life.  They need oxygen for respiration and water-borne particles for food.  The larva feed on micro-organisms and organic material in the water where they breed.

The illustration below from a CDC(Centers for Disease Control and Prevention) manual shows three of the most common mosquito genera and some of their chief characteristics.

This interesting photograph shows the proboscis of a mosquito.  The proboscis is the mouth part of the female mosquito that is used for sucking blood. 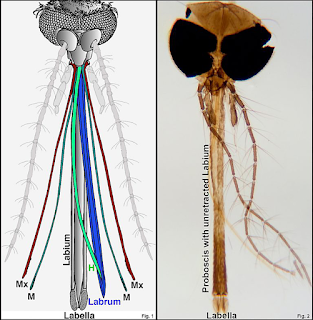 Sometime insects like the one pictured below are mistaken for mosquitoes.  The easiest way to tell the difference between a crane fly and a mosquito is by observing the mouth parts.

By eliminating the larval habitats on your property and taking a few simple precautions, you can reduce the threat of mosquito-borne illness and annoyance in and around your home and neighborhood.

Deadnettle and Henbit. What's the difference?

Deadnettle or purple deadnettle and henbit are often mistaken for each other.  Once you know what to look for they are easy to differentiate.  First some background.  In some of the literature you will see these plants referred to as purple deadnettle(Lamium purpureum) and henbit deadnettle (Lamium amplexicaule).  Unlike some other nettles, deadnettles do not sting.  In other words it is a "dead" nettle.  The common name henbit comes from observations that chickens like to eat it.

Deadnettle and henbit are winter annuals.  Both plants germinate in the fall and resume growth in the spring as the temperature rises, they set seed and then die in the late spring or early summer.


Henbit has petioles on the lower leaves but not the upper leaves.  The upper leaves are clasping, hence the species name amplexicaule which means clasping.


The leaves on deadnettle all have petioles.  The length of the petioles tend to get smaller as you move upward on the plant.


Notice that the leaves on the deadnettle are more triangular in shape and not as deeply lobed as the leaves on the henbit.  The leaves of henbit have a more rounded shape, are deeply veined and have hairs on the upper and lower surfaces.

Visit the weed control links listed below for information on controlling these weeds around the home or in the lawn.

NOTE: Always read and follow herbicide directions carefully. Do not use herbicides for controlling broadleaf weeds in turf such as dandelion in or near ornamental planting beds. If weeds are a persistent problem in landscape planting beds homeowners may wish to consult with a professional landscape contractor.

There is a new invasive species in New Jersey: the longhorned tick (Haemaphysalis longicornis).  The longhorned tick is a member of the family Ixodidae which means that it is a hard tick.  Hard ticks have three distinct life stages.  Depending on the temperature, the tick's eggs usually hatch between 60-90 days.  When the larva emerge from the eggs they have three sets of legs.  After having a blood meal they molt and become nymphs and acquire four sets of legs.  Nymphs feed for approximately 7 days and detach.  The nymph then spends about 40 days living under the vegetation before molting and becoming an adult which also has four sets of legs.
The longhorned tick finds a host using a behavior called "questing".  A questing tick crawls up the stems of grass or perches on the edge of leaves.  When the tick detects a host it uses its extended front legs to attach itself to the host.

After having fed on a host for about seven days, the female detaches itself and begins searching for a suitable place to lay eggs.  Within 1-2 weeks the female tick will lay around 2,000 eggs during a 2-3 week period.  Because the longhorned tick is a parthenogenesis species, it can reproduce asexually.  The female does not require a male tick to reproduce.

While the longhorned tick is new to New Jersey it has been a pest in New Zealand for decades. In New Zealand the tick has been found on the following animals.

Mammals
Birds
Prevention
Most tick bites can be prevented.   Some of the simple things you can do to prevent exposure to ticks are:

Here is a short video that demonstrates the proper method for removing a tick.

Identification
If you find a tick you can bring it to the Rutgers Cooperative Extension office located at 2 Academy Dr, Westampton, NJ 08060 for identification. Ticks should be placed in a sealed plastic bag or a container with a small piece of moist paper towel to prevent dehydration.

How to Recognize a Longhorned Tick - Center for Vector Biology, Rutgers University

Spiderwort (Tradescantia virginiana) is native wildflower.  A herbaceous plant that grows up to three feet tall.  Noted for its three-petaled violet-blue flowers with six contrasting yellow stamens which grow in terminal clusters.  The flowers open a few at a time and for only one day.  The root system is thick, fleshy, and fibrous, sending off occasional offshoots nearby. Spidewort thrives in thickets, meadows, roadsides and woodland borders.


While the flowers are beautiful, spiderwort can take over a flower bed.  Spiderwort is difficult control because of its large root crown which provides energy for regrowth.  In small areas and hand removal is the best method of control.

The spotted lanternfly has been reported from over 70 species of plants, including the following:
Adults are 1 inch long and ½ inch wide at rest. The forewing is gray with black spots of varying sizes and the wing tips have black spots outlined in gray. Hind wings have contrasting patches of red and black with a white band. The legs and head are black, and the abdomen is yellow with black bands. Early immature stages are black with white spots. By the last immature stage they develop red patches in addition to the black color with white spots. This is the last immature stage before they mature into an adult.  Immature insect and adults are visually striking when the bright red of the hind wings is exposed.

Adults feed by puncturing the plant tissue to feed on sap.  The feeding damage can cause sap to run down the surface of the plant and encourages the growth of sooty mold which leaves dark streaks on the trunks of trees.
If you think you have seen or collected a Spotted Lanternfly please report it to the New Jersey Department of Agriculture and the Department of Entomology at the Rutgers School of Environmental and Biological Sciences by emailing slanternfly@njaes.rutgers.edu.